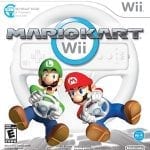 Start your engines and race with Mario and his friends with their finely tuned racing machines in Mario Kart Wii. Use 3 different control styles with the Wii Wheel included in the box. The worldwide race is on with a whole new set of tricks, tracks, and ways to play. Mario Kart Wii draws on courses and battle arenas from every game in the series – not to mention tons of new ones. The true king of the Mushroom Kingdom racing circuits will finally be crowned. Experience new tracks, enhanced Wii graphics, extraordinary gameplay and much more. Place first in Grand Prix circuits or clear skill-based missions to open up increasingly difficult and thrilling circuits. You can have multiplayer races on any open courses or battle in arenas. Now you can feel like you are Mario and steering to avoid obstacles and doing incredible stunts.Special Powers/Weapons/Moves/Features – Shake the Wii Remote to pull off a trick that will temporarily boost your speed. When riding a bike, gain additional speed by flicking the Wii Remote up and popping a wheelie Up to 12 people via Nintendo Wi-Fi Connection or up to 10 people via Wi-Fi Connection with 2 people playing locally.Source: dolphin-emu/gametdb