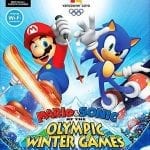 Mario and Sonic come together again, this time taking their rivalry to the snow and ice in another officially licensed Olympic-themed game. Mario & Sonic at the Olympic Winter Games will take players to Vancouver, Canada, host city of the official 2010 Olympic Winter Games. This gaming experience invites players of all ages and skill sets to face-off in intense winter competitions. The game will take players to lifelike Olympic venues where they can choose from a legendary cast of playable characters, including new faces to the series to be revealed later this year. Players of all skill levels will enjoy the intuitive controls in both single and multiplayer gaming modes. Additionally, one of the new features to be found in Mario & Sonic at the Olympic Winter Games is the inclusion of the Wii Balance Board which can be used in some events featured in the Wii version, allowing for a more interactive and realistic gaming experience.