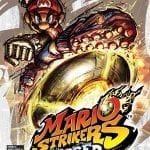 Supercharged Characters! – The captains from Super Mario Strikers are back, joined by four new ones, and now you can create your own original team by mixing and matching your captain with an all-new cast of sidekicks. All characters have their own sets of special abilities, making each one play completely differently from one another. New captain super-abilities and sidekick skill-shots add a new level of depth to already crazy soccer battles on the most unpredictable and hazard-filled pitches in the Mario universe. Each field features its own set of interactive hazards that alter game play over the course of the game. **Nintendo Wi-Fi Connection Game Play! – There are tons of new single-player modes, from tournaments to challenges to tutorials, but the game truly shines in multiplayer. The game features a robust multiplayer mode—up to four players can battle locally, or they can go online in each specific sales territory for one-on-one matches. **Kickin’ Wii Controls! – Building on the frantic fun of Super Mario Strikers, this game gets you into action only possible on the Wii. Primary game play controls use both the Wii Remote and Nunchuck controllers. Use the Nunchuk to control your characters and deploy items. Flick the Wii Remote to perform the defensive “Big Hit” move and flatten foes. To defend against a “Mega Strike” goal attempt, use the Wii Remote to point at the screen and manually defend against multiple balls as they rocket towards the screen!