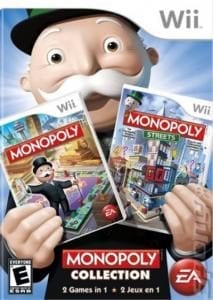 The first of the adaptations were released in 1985 with the release of Monopoly for the BBC Micro, Amstrad CPC and ZX Spectrum. Over the years, Monopoly has been released for different operating systems on the PC and Macintosh platforms. Also, versions have been licensed and produced for the NES, Super NES, Game Boy, Game Boy Advance, Nintendo 64, Nintendo GameCube, PlayStation, PlayStation 2, Sega Master System, Sega Genesis, Xbox, Xbox 360, PlayStation 3, PlayStation Portable, Wii, and Switch consoles, as well as mobile device (PDA/Smartphone) versions. There’s even one for the Game.com system from Tiger Electronics.

The game plays by the same rules as the standard board game, and allows for single or multi-player games. When a single player game is chosen, the game would generate computer-controlled opponents.

One of the lesser-liked features of the game was that the players could play only in the exact style programmed into the game. This could be slightly different than the various “house rules” that many homes employ, and could cause problems. An especially problematic feature was the mandatory auctioning of unpurchased properties, that led to rich players having a better run of the board. Some versions however, like the Nintendo 64, PC, and PlayStation versions, do allow the most common “house rules” to be turned on, such as Free Parking jackpot, no collecting rent in jail, unlimited houses/hotels, collecting double salary for landing on GO (i.e. $400 instead of $200).