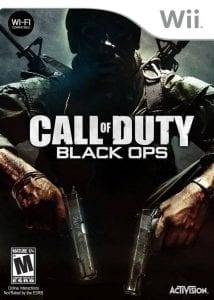 Black Ops is a first-person shooter, retaining the same gameplay mechanics as previous Call of Duty titles. The player assumes the role of a foot soldier who can wield various firearms (only two of which can be carried at once), throw grenades and other explosives, and use other equipment as weapons. A player close enough to an enemy can kill with one knife blow. A character can take three stances: standing, crouching or prone. Each affects rate of movement, accuracy, and stealth. The player can drop to the prone stance from the standing stance while running (colloquially known as “dolphin diving”), and can momentarily sprint before having to stop. The screen glows red to indicate damage to a player’s health, which regenerates over time. When the character is within the blast radius of a live grenade, an on-screen marker indicates where it is in relation to the player, helping the player to move away or to throw it back. Among the weapons new to the series in Black Ops are crossbows with bolts and explosive ammunition, Dragon’s Breath rounds and ballistic knives.

The player assumes the role of various characters during the single-player campaign, changing perspectives throughout the story. The playable characters are special forces operatives conducting black operations behind enemy lines. In this way, the player’s characters have their own traits such as voices and shadows. Each mission features a series of objectives that are displayed on the heads-up display, which marks the direction and distance towards and from such objectives as it has been in the earlier versions. The player is accompanied by friendly troops throughout the game. Although primarily a first-person shooter, certain levels feature sequences where the player pilots a Hind helicopter and guides friendly troops from a SR-71 Blackbird reconnaissance aircraft. The campaign features several scripted cinematic moments. One of them is a bullet time effect during the “Victor Charlie” level, activated when the player fires toward the last enemy of a Viet Cong squad.