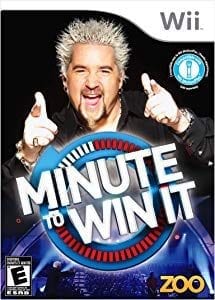 Minute to Win It is an international game show franchise where contestants take part in a series of 60-second challenges that use objects that are commonly available around the house. The first version of Minute to Win It to air was the American primetime game show, which premiered on NBC on March 14, 2010 and ran till 2011 with host Guy Fieri. It was revived in 2013 on GSN with host Apolo Ohno. The second network to air a version of the concept was Brazil’s SBT, on April 17, 2010. This series was called Nada Além de um Minuto (Portuguese for Nothing But a Minute) and was played as part of the pre-existing program Programa Silvio Santos, hosted by Silvio Santos. Then on April 30, 2010 Germany’s Sat.1 aired Die perfekte Minute (The perfect Minute) and on June 22, 2010 Australia’s Seven Network aired Minute to Win It. Currently over fifty countries worldwide have produced a version of Minute to Win It.

The first two episodes of the American version played back-to-back at 7:00 pm Eastern and Pacific. On October 6, 2010, Minute to Win It was awarded the C21/Frapa Award for Best studio based game show format at the MIPCOM Television Festival in France.[1] A card game, board game, and video game versions for the Wii, Kinect and Nintendo DS have been made for this show. The U.S. season two finale aired on September 7, 2011. On May 13, 2012, NBC announced that the English version of the show would not be renewed for a third season.[2]

Minute to Win It aired new episodes on GSN Tuesday nights at 8/7c. The first season of GSN shows began in June 2013 and ended in October 2013; the second season premiered in February 2014 and ended in April 2014.