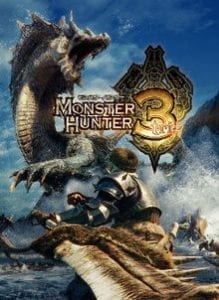 The game was originally planned to be a PlayStation 3 title, but due to high development costs for that console Capcom instead decided to develop it for the Wii.[6] Prior to its debut, a demo of Monster Hunter Tri was included with Japanese copies of Monster Hunter G. A special bundle was also released on August 1 featuring the game packaged with a black Wii console and a Classic Controller Pro. On August 3, 2009, Capcom issued a press release confirming the game would be localized for North American and European markets.[7] On February 24, 2010, Capcom announced that online play would be provided free of charge. Although now, online play is no longer supported.[8] In America and Europe, separate servers are used and Wii Speak is supported, making the first game in the franchise to include native VoIP capability.[9] It was a critical and commercial success. An enhanced port called Monster Hunter 3 (tri-) G in Japan and Monster Hunter 3 Ultimate in other territories was released for the Nintendo 3DS in Japan in December 2011 and in North America and Europe in March 2013. The online servers for the Wii version of the game have been shut down as of May 1, 2013.[10][11][12]