Subwoofer install on my 2006 Toyota Prius

Although the base sound system in the Toyota Prius isn’t horrible, it isn’t great either.  With 5-1/4″ speakers in the front doors and the same in the rear, the mids and highs are good but the bass is sub-par to say the least.  While upgrading the door speakers is always an option, I didn’t feel like shelling out any money at the current time and I already had a subwoofer, amp, and wiring, which I pulled from my Civic when I sold it.

I wanted a “stealth” install, while keeping as much storage space as possible.  After doing much research at priuschat.com, I opted to mount the amplifier in the upper half of the rear storage box.  I did this for two reasons, firstly I knew that I would want to make changes to the settings on the amplifier, depending on the music I was listening to.  This of course can be done with the bass control on the head unit, but it is limited.  The second, was for the “stealth” install,  I can easily lift open the hatch to access if needed, but it is not visible from outside the vehicle.

One of the problems that held me back on performing the install was inputs.  In all my previous cars I was able to utilize the low-level outputs on the after-market radio.  But since I was keeping the factory stereo, this was not an option.  So the only other way to get the sound into the amplifier, was to use the high-level inputs or tap into the rear speakers and run them into the amp.  This amp is probably 8 years old, so I didn’t exactly have the high-level plug laying around, in fact they were probably in the trash the same day I got the amp.  So I needed to locate one.  I looked around on eBay and car audio sites and found a few, but after investigating the plug further, I had seen this plug somewhere around my house, on a computer power supply!  Yup the plug I needed what a P4 molex plug!  Luckily I had recently pulled the power supply, as it was fried, so all I needed to do was cut if off.  Problem solved! 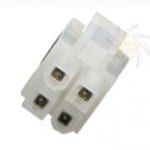 I was not too worried about wiring the power to the amp for one reason.  The battery is in the trunk!  Lucky me.  So the plan was to tap the car battery, not the traction battery.  Run that to a distribution block then into the amp.  Easy!

The last issue was the remote wire.  I needed to tap into a 12V power source to turn the amp on/off when the car turns on/off, so not to kill the battery.  Luckily the Prius has a switched 12V outlet in the center console, so when I ran the speakers wires for the high-level inputs, I ran the remote wire as well.  A couple days later I added a push button switch on the remote wire and mounted it on the inside of the center console, so when I didn’t need the amp on, I could switch it off.

I used the distribution blocks for a couple reasons, the first was I used 0-gauge wire from the battery into it, and 8-gauge going to the amp, the second was I have a 12V to 120V power inverter that I planned to install at a later time and lastly, which I am still worried about is, accessing the spare.  The way I ran the wires from the distribution block to battery, I will be unable, to easily pull the storage box out to access my spare tire!  I do plan to add quick disconnects, sometime in the near future, but until then, I’ll have be satisfied with disconnecting the distribution blocks if I need to access the spare.  I also have a bottle of Fix-a-flat in the trunk, which I will try before attempting to gain access to my spare.

Below are some pictures I shot last night, I am hoping to get more with more detail (install, wiring locations,etc) in the near future, but until then, these will have to do.