We have owned our A.O. Smith gas water heater for almost 6 years, which was reaching the end of its warranty from the manufacturer. Over the past six months or so we’ve been having problems with the hot water heater turning off at random, which was later contributed someone or something bumping the wire to the control unit. The fix for a while was just to give the wire a wiggle and wait for the controller to light back up and sure enough the heater would turn on. The most recent time this happened I had much issue with the wiggle fix and decided to inspect the wiring, maybe just something was loose. Upon inspection I found two of the terminal on the connector burnt pretty bad. So I grabbed the owner’s manual, jotted down the model, serial and installation date, then completed a contact from at hotwater.com, the manufacturers webpage. After waiting a month without a response I found time while on a break at the office and gave them a call. The service rep was quite knowledgeable and helpful, she explained that this is a known issue with this model, and they would overnight the replacement parts. She also gave me some authorized service dealers in the area which I could contact to complete the install under warranty, no cost to me. I felt quite accomplished (it’s the little things), I sent my wife the service dealers info so she could setup a service call to get the parts replaced.

This is where it goes downhill, the only service agent in my area, would only perform the service if we paid for the repair and travel. Really? This should all be covered, which my wife explained to them, they replied that the manufacturer took up to three months to reimburse them for warranty work. When my wife told me this, my thought was that the manufacturer paid a lower rate for warranty work, and they were trying to make some money, which could be, but we will never know.

After taking some pictures of the unit, one my of co-workers and I looked them over and thought “this will be easy.” So after receiving the parts the next day, I was determined to get it repaired, without any outside help!

Below are the steps I took to replace the control valve and wire.

Warning: The below is for educational purposes only, if you are not comfortable performing the work, don’t do it, contact a professional, I am not liable for any damage or injuries to you, your house or any neighbors, etc… Read the terms of use here, if you wish.

Tools I used:
Phillips screwdriver
(2) pipe wrenches
Crescent wrench
Gas line thread sealant
Gas line thread tapeTools that I did not use, but you may need:
Side cutters or similar wire cutting tool.Did you lose your manual?  Download it here:

1. First thing you’ll want to do is unplug the unit and for good measure, turn off the power switch. Next shut off the gas to the hot water heater, it should be a quarter turn valve somewhere upstream on the gas line going to the unit. Lastly turn the water shut-off off. This should be located directly above the tank on the water inlet, if one cannot be found, you can also turn off the water for your entire home, if needed. 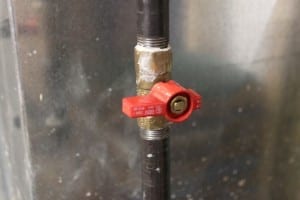 2. Next we need to drain the tank, this can take a considerable amount of time, so make sure you have the valve wide open, also it can help to turn on a faucet somewhere in the house a put it on hot. This does two things, it will start draining the tank and allows air into the line to let the water drain faster from the tank. 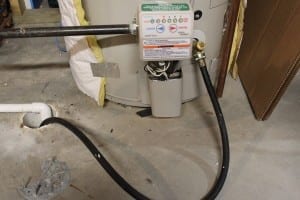 3. While the water is draining, we can still get started with some items that don’t directly involve the water in the tank. The first thing I did was remove the old cable from the heater, mine had already been replaced once, so it was a matter of just unscrewing some screws and removing. If your original cable is still attached, it goes inside the heater. This will apply to more than not, to remove this cable, first disconnect it from the top power box and the lower valve, by pressing the plastic tab and pulling it out. Then you need to cut the cable, to do this grab your favorite pair of side cutters and cut the wire as close as possible to the tank. 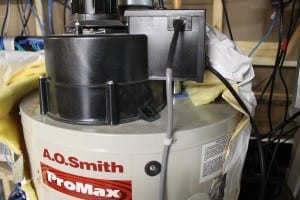 4. Install the new cable, my replacement parts shipped with a “wire channel” which I did not choose to use, although I may put it on later.

5. Next to be addressed is removal of the gas line. To do this locate the union downstream from the heater, and disconnect the outside “nut.” Next move the existing pipe out of the way, so you’ll be able to rotate the part connected to the heater. 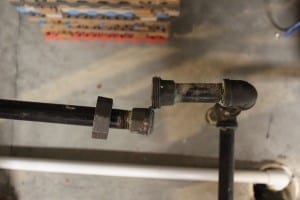 6. To remove the part connected to the heater, grab your pipe wrench and give a turn to break seal on the gas line, after that it should spin freely, then remove.

7. Next is to remove the flange nut, which connects the valve to the burner. Before doing this disconnect the burner wires from the control, they should be white and black, but will be a single row of four. Press the tab and pull down gently. Next using a crescent wrench, give it a turn to loosen, then remove using your hands. 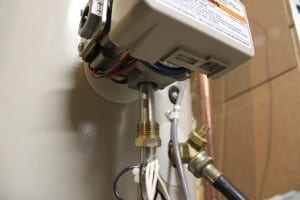 8. Remove the pipe from the valve by pulling down gently, then pushing it to the left, enough to be out of the way so the valve will spin freely, to remove. 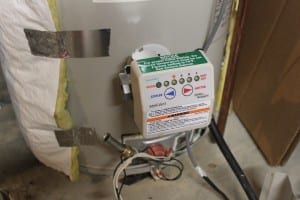 9. Valve removal. OK this is where you want to be sure all the water is out of the tank. You should be able to tell by the flow or water coming from your drain hose, if it is merely a drip, open up the PRV (pressure relief valve), with care. This will allow air in the tank. When I did this I actually heard a fizz. 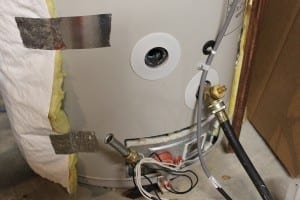 11. Once removal is complete, locate the new valve. The new valve should already have valve sealant on the thread, if not apply liquid or tape thread sealant. Then carefully insert and tighten. Once it gets to hard to tighten by hand, grab your spare piece of black pipe and give it one more turn and line it up, so it is level.

12. Next we need to re-attach the burner line and the flange nut. Put the pipe back in and slide the nut up and attach, this should not be over-tightened tighten by hand then a quick short pull with a crescent wrench, should be enough.

13. Next we need to re-attach the gas line to the valve. Apply thread sealant to the thread and attach. 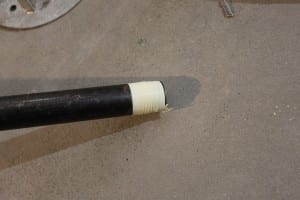 14. Next re-attach the union, first apply thread sealant to the thread and tighten down.

16. Next reconnect the cables to the control valve, there should be one from the burner and the second that you replaced earlier from the power box.

17. Now before you do anything, close the drain valve! Yes simple, but can be easily over looked. And close the PRV if still open. You can also disconnect the drain hose at this time.

18. Once you are sure you have no gas leaks and all connections are good, turn the water on, plug the water heater in, turn on the gas, and flip the switch, if you turned it off earlier.

19. Now if everything went as planned, you’ll hear the fan turn on and the vacation light will light up on the control for about a second.

20. The unit now goes into vacation mode, in which the unit does not turn on. To take it out of vacation mode, hold the hot and cold buttons on the front of the control until the vacation light turns on. Next press the hot button until it is at the default temp, three of four presses. 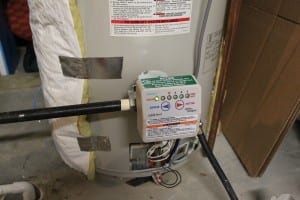 21. The unit should have turned on and water started filling by now.  If you had turned on a faucet earlier it should be at this time starting to spit. As the tank fills, the air let in earlier will need to be vented, so the faucets may “spit” a little when turned on. I also noticed some of the hot water a little brown initially as well. This is from the sediment sitting at the bottom of tank getting stirred up and should settle shortly. 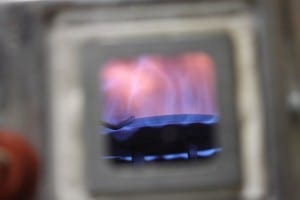